Táncháztlálkozó or táncház festival and fair is an annual event in Hungary since 1982. It is held in the month of April as part of the Budapest Spring Festival. It takes place during a weekend and starts with a “warming up” concert and tanchaz (dance house) in one of the dance house venues. This year (2016) it took place on the 2nd and 3rd of April with the “warming up” in the dance house of Fono (known as one of the most important CD producers of traditional Hungarian music). This year it was held for the 35th time in the “Papp László Budapest Sportaréna” in Budapest. This venue was constructed in 2002/2003 and opened in March 2003. It's capacity is up to 12,500 spectators. So space enough. According to some people there were 10,000 participants on Saturday and Sunday, but we think it were less: 5,000 to 7,000 or so. Of course there is also some criticism about the scale and getting more commercial (see the Dumneaza blog of 2010) but we had a very nice weekend there. 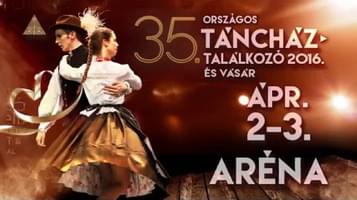 There has been written a lot about the Táncház phenomenon and you can find a lot of information on the internet. Last year there was published a very comprehensive book in both English and Hugarian: The Story of Hungarian Folk, written by Béla Szilárd Jávorszky (published by Kossuth Kiadó, ISBN 978-963-09-8414-0). A must read for everybody who is interested in this topic.

On Friday evening we went to the “warming up” party in the Fono House. This is an old factory, situated in the southern part of Buda. The evening started with a concert given by Nikola Parov and his band, a Bulgarian who lived since his youth in Budapest. He is a multi instrumentalist and made already a lot of recordings. The singer was Ágnes Hercku. They brought a Hungarian and Balkan program. The repertoire of Parov is balancing between world music (the better sort of) and traditional music, but always pleasant to listen to. After the concert the dance house party was held in an other room accompanied by the band Dűvő. They play in a traditional style, long pieces of 20 to 30 minutes; slow, medium, fast. The quality of their playing was, as known from their recordings, excellent.

Saturday and Sunday to the “Papp László” arena. It is really huge. The whole day bands on the stage and people dancing in front on the floor. On Sunday there were also performances on the stage. On both sides there was a market with booths where you could buy food, cd's, musical instruments, etc. There was a special room where people were selling clothing. Despite of the fact that it is a little bit commercial, it still did us remember ot these beautiful folk markets and feasts as we have seen everywhere. We shook hands with Zoltán Kallós, who did so much for collecting and preservation of Hungarian music in Romania. Unfortunately he speaks only Hungarian, Romanian and Roma, but it was nice to see him in the booth, were 20 recently produced cd's with his recordings were on sale (Kallós Archivum 1 - 20). There is a nice book about his whereabouts and informants, published by the Open Air Museum in Szentendre („Setting off on the road”, Szabadtéri Néprajzi Múzeum, Szentendre 2015, ISBN 978-615-5123–43-6).

There was also entertainment for children. They could learn old handicrafts from the elders, prepare traditional food and play old traditional children games, like horseshoe toss.

Besides the dancing and performances in the main hall, there were also activities in smaller rooms, that are situated around it. They were dedicated to special performances; for instance best young talent dancers, etc. The festival also included a presentation of a new cd and concert of Félix Lajkó.

Every year there has been published a record, and later CD, of promising singers, instrumentalists and bands of that moment. The first two years by a small label Magyar Szinkör. In 1984 Hungaroton took over and issued every year an LP record till 1994. From 1994 till 2002 a cd of the festival was released by the Hungarian Institute of Culture and from 2002 till now by the Hungarian Heritage House. To give an impression of the beginning, we have added the content of two records: from the fourth (1985) and the fifth (1986). You can find them here.

Pictures of the festival can be found here.