In April 2018 we gave a presentation at the symposium of the ICTM Study Group on Music and Dance in Southeastern Europe about the migration of melodies. We use part(s) of melodies as an example. The full version of which the examples are extracted can be found at the end of this page.

People, or a whole population, are migrating. This has happened in the past as well in recent times. If so, they bring their music with them to their new living places. But melodies can also “migrate” independently from the places and people where they originated and travel over a long distance or spread over a larger region. This can be caused by various reasons; among others:

Song texts can “migrate” with the melody, but they can also change if they have reached their new destination. What was originally a historical ballad can change in a love song in another setting.

The song "Tora ta poulia", "And now the birds are singing", is originally from Western Thessaly and Eastern Epirus. Three versions of this song:

Forced or "encouraged" migration of population

A lot of people had to move to other places after the Balkan Wars and the first world war. Even if there was no treaty in which migration or exchange of population was agreed. New rulers of the just acquired regions did there utmost to get rid of their new "alien" inhabitants that came under their jurisdiction. The first example is one of not forced but highly "encouraged" migration, the second of of forced migration as agreed in a treaty. Two cases in which melodies were brought by emigrants to their new home. A melody, they often shared with other ethnic groups with which they lived sometimes for centuries together.

The first example is from migration of Turkish people from Macedonia and Kosovo. After the Balkan Wars Turkey had lost nearly all of its territory on the Balkan. A lot of Turkish people went along with the retreating Turkish army to Turkey. In the mid twenties and mid fifties also a lot emigrated. As an example: the Turkish population of Macedonia decreased from nearly 500.000 before the Balkan Wars to 78.000 in 2002. This was not really a forced emigration but more caused by poorer living conditions and lack of prospects.

A number of emigrants settled in Üsküp (Kırklareli province). Most of the original population was ethnic Greek and had to leave Turkey by the population exchange after the Turkish - Greek war of 1922. So there was place for new inhabitants. Curious fact: the Turkish name for Skopje is Üsküp. But in this case it seems that the name is derived from the Turkish name for the Scythians (Turkish: İskit).

Two versions of a dance, known in Macedonia, Kosovo and now Turkey. The first played by a zurla group from Tetovo, (a version that "stayed behind"); the second is a version that was brought to Üsküp by emigrants.

The following example is one of forced migration of population. After the First World War in the Peace Treaty of Neuilly was stipulated an exchange of Bulgarians, living in Greek Thrace and Greeks, living in South Eastern Bulgaria. According to sources of that time this affected about 50,000 people on both sides. The Greek emigrants were mostly settled in Greek Thrace (Evros region). They took their music with them, which they shared with Bulgarians when living in Bulgaria.

First the Bulgarian version of a dance melody ("Čukanata") and then the Greek version now played in Greek Thrace ("Daktili"). The third version comes also from Greek Thrace. It is a vocal version with a text that was also used in another Greek song. The text is about girls, going to dance, the boys join in, etc.

Occupiers bring music with them

There existed of course a lot of musical contacts between the Turkish population that settled on the Balkan during the Turkish occupation and the home country; especially with Istanbul. This concerned not only traditional music but also Turkish classical music.

At the end of the nineteenth century it became practice to end a Turkish classical suite (fasıl) sometimes with a styled folk dance. One of these dances is the sirto, derived from the Greek syrtos.

A sirto as performed by a classical Turkish ensemble ("Çargâh Sirto"), followed by a popular interpretation by Turkish folk musicians from Prizren (Kosovo). They call it "Zeybek", which is incorrect, for a Zeybek has a nine beat meter.

It is obvious that local musicians were influenced by the music, occupiers brought with them. In this case from Macedonia you will hear a song "Gorušice crno oko", based on a Turkish folk song from Turkish Thrace "Dağlar, dağlar viran dağlar". Both are love songs, but with different text. The Macedonian version has still a Turkish flavor because it is accompanied by a čalgija ensemble. The third example is accompanied by an orchestra of traditional instruments and is sung in parts by three men from Northwestern Macedonia. It sounds already much less Turkish.

A possible link between Turkey and Macedonia could be the issue of three 78 rpm records, recorded between 1910 and 1915 in Thessaloniki with the song "Dağlar, dağlar viran dağlar":

The following example has disseminated itself along trade routes that were in use in the past millennium. This is of course an assumption and can not be proven by physical evidence. But the widespread area where this melody is played indicates in that direction. It can also be found in Western Serbia.

The melody showed also up in classical music. Petko Stajnov (1896 - 1977) used the melody for the first part of his Trakijski Tanci.

The following map shows the trade routes and the place where the examples originated. 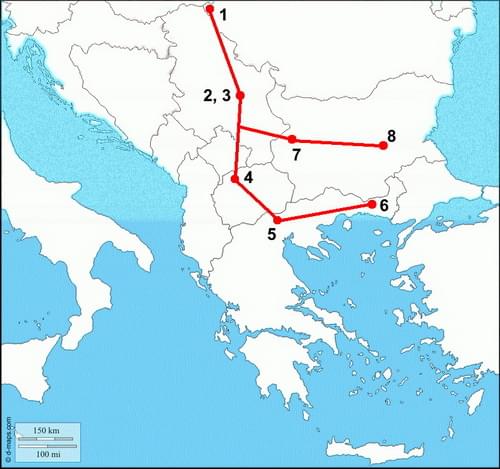 The numbers are choosen at random and used only to locate the places on the map. It is often impossible to exactly trace the way a melody has traveled, if it has done so.

In August 1967 we made a recording in the evening during a wedding party in Peštani on the lake of Ohrid. The accordionist played a dance which we knew from a just bought record with Bosnian songs. He called it Pravo Oro. On the question where he got this music from, he answered that he heard it on the radio, remembered it later and added it to his repertoire.

What he played was a year before issued on a record. The name was "Oj Safete, Sajo, Sarajlijo" and was composed by Dragan Toković, a known composer of traditional music like songs.

In 1962 Rickey Holden (a folk dance teacher in the US and partner of the Folkraft label) asked Denis Boxell if he could record Macedonian dances for three records to be issued by Folkraft. Boxell was at that moment in the US army in Germany. He went to Macedonia and with the help of Atanas Kolarovski he made a lot of recordings. A special orchestra was formed for a number of these recordings: Koče Petrovski accordion, Tale Ognenovski clarinet, Pece Atanasovski gajda and Ačo Piperkov guitar.

When Holden asked Boxell if he could make also recordings of Bulgarian Dances he tried to go to Bulgaria. His visum for Bulgaria was refused because of his job in the army. So he decided to ask the orchestra to play a couple of Bulgarian dances. One of these was: "Jove, maloi mome". Pece Atanasovski recorded it in 1970 for RTB, called it "Janino Oro" and put his name under it as composer. Nowadays it is often played by orchestras of traditional instruments and nobody knows the story behind it. They consider it as traditional "narodno".

First a Bulgarian version, then the Folkraft version and as last one the version Pece Atanasovski played with his orchestra.

A melody that is played on Corfu (Kerkyra), based on a German steet song (Gassenhauer) composed by Franz Meissner in 1892, text from Otto Rathke and/or Otto Teich. The song is based on the auction of firewood as result of logging to make place for the planned residential area Grunewald. The title is: "Im Grunewald is Holzauktion" (Wood is auctioned in Grunewald).

But how did this melody came to Corfu? The German emperor William II was very fond of this melody and always had a score with him. He bought the small palace that, the Austrian empress Elisabeth (Sissy) had built on Corfu, and stayed a couple of times there during the summer. In the summer of 1908 a philharmonic band brought him an aubade. He gave the score to the conductor and asked if they could play it for him. They did and adopted the music for a local dance "Gastouriotikos".

All music examples are taken from our collection, except the recording of "Im Grunewald", which is from YouTube.

All other information comes from our library, except:

Full version of the used examples

The time in the second column gives the start of that track. It roughly indicates the start time and may vary by a minute or so.