Sinjska Alka and The Didi of Gljev - Croatia 2018

From Split, 25 km northeast you arrive in the Dalmatian hinterland, the Cetinska Krajina, a group of settlements situated on a fertile karstic field through which the river Cetina passes. Sinj, a small old town is situated in-between four mountains. A bit further, close to the Bosna and Hercegovinian border you will find the little village of Gljev. Both, Sinj and Gljev are very interesting, for their intangible cultural heritages. We were lucky, that our Croatian colleagues of ICTM invited us to come to this area to see these UNESCO ICH customs. 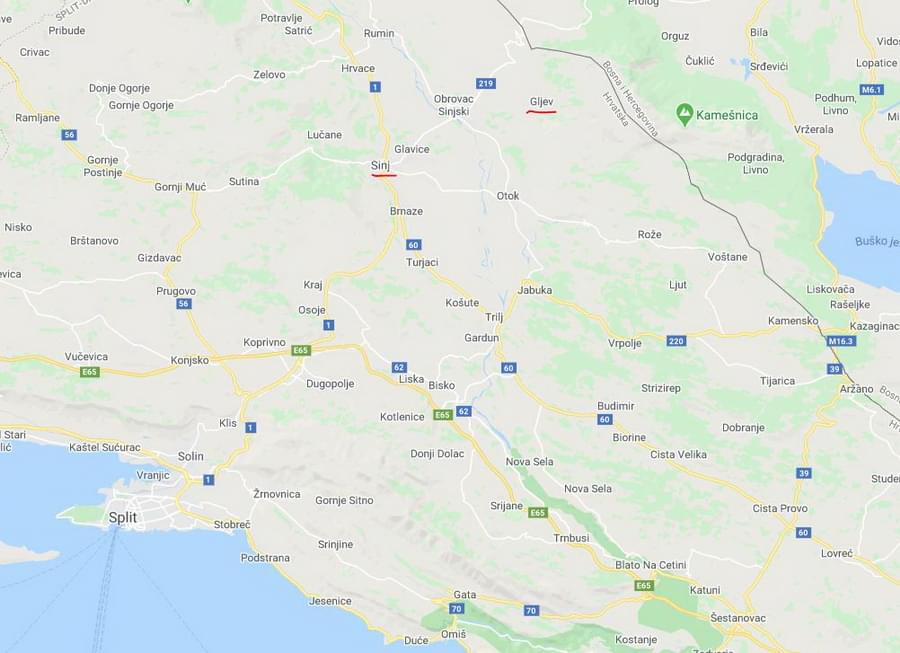 In 1715 a huge Ottoman army tried to occupy the city of Sinj. A group of only 1500 armed Croats and Venetians were the defenders of the city against 10.000 Ottomans. The local priests prayed intensively for the town to be saved. The legend tells, that the Madonna heard the town’s prayers. A woman in white was seen walking on the walls of Sinj and the Ottoman warriors thought it’s better to withdraw. In honour of the Lady of Sinj and, as gratitude to her assistance, the town decided to host an annual remembrance, the Sinjska Alka. Nowadays celebrated in the first weekend of August. You can click here to see the youtube film UNESCO Sinjska Alka, from the Croatian Ministery of Culture.

The Sinjska Alka is an equestrian competition, where a rider strives to hit the Alka, an iron circle, with his iron-tipped wooden lance as he gallops, full speed down the main street. The Alka is not just a ring, but an iron circle, that has a smaller circle held at its center by three strips of metal. This Alka hangs on a rope above the main street at a height of 3,34 meter.

Of course there is a parade through the streets of Sinj first. Members of the parade are the Vojvode, the Duke of the Knights of Alka, a rider decked out in gold; the Knights themselves in their military-looked long jackets,  their squires, well armed in their local costumes, the marching band, the shield and mace bearers and not to forget the grooms, responsible for the Vojvode’s second horse.

The competition is led by the Vojvode. There are 11 till 17 Alkars selected. On the sign of the Vojvode an Alkar starts slowly on the 160 meter track, but has to reach the Alka in less than 13 seconds without loosing his hat or any part of his attire. Hitting the inner circle secures him of 3 points. The other portions have the values 1 and 2. All the Alkars start several times and the Alka with the highest points is the winner!

Not anybody could become an Alkar. You must be a boy, your father or you must be born in Sinj or one of the surrounding villages. When you are 10 years old you can become a member of the Alka riding club. You must show your talents, you must promote ethics and fair play, be an involved member in the community. When you are around 20 years old, you could have the chance to be selected. Click here to see the youtube film "Becoming an Alkar", by Sail Croatia.

In the villages of Gljev, Han, Bajagić and Gala carnival pageants still are in use, where unique and authentic rituals are presented. Special for us, the ICTM group, the Didi s Kamešnice (Old Men of Kamešnica) association presented in Gljev their rituals on a very hot April day, instead of the normal custom at the end of January. 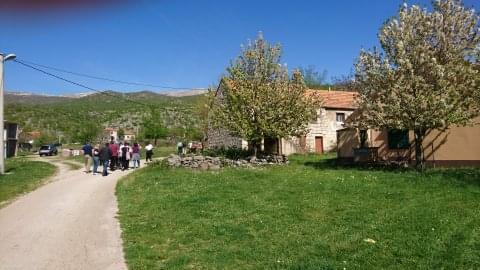 This tradition is preserved and is a very important part of carnival events in the villages of Took, Udovičići, Ruda, Grab, Vedine, Velić and Vrpolje-Čačvina. This tradition is still reserved for men only who dress up in costumes and take on the roles of the various characters described below. The most remarkable part of the carnival pageant in Gljev is the march of the “Didi” (meaning old men) who present themselves as a loud group of colourful rams. Click here to see a Youtube film about the carnival in Gljev. 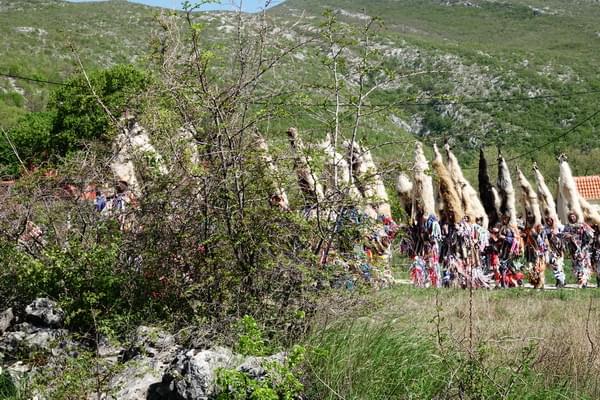 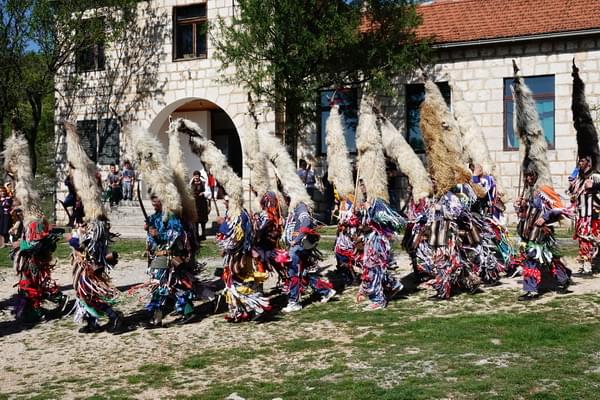 The pageant has strict tradition-based rules and there is a range of characters who participate in this colourful parade. The first to lead the pageant is the white pageant group with the Barjo (standard-bearer) and a carnival wedding procession. They are followed by a Komedija (comedy) troop and the black carnival pageant group. The wedding procession symbolises spring and is led by the first Did (old man) or by the Barjo. A pregnant, mannish bride, walks with the brides man and looks for the spouse, which is the main purpose of the pageant. There are Jenge or married women, Jengije or maids, and other wedding participants who all wear traditional outfits. The Turčin or Ottoman is in command of the pageant and makes sure that white and black carnival groups don’t mix, there is also a character called Bula, a veiled female figure who tries to kiss young women. Both of these characters are connected to the extremely long presence of the Ottomans in this area, and the comedy group is there to criticise current social and political issues. 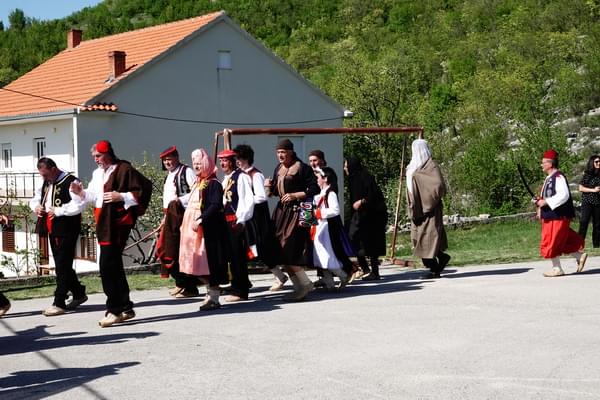 The black wedding procession is led by Baba and Did (old woman and old man). During the pageant, this couple simulates sexual intercourse in order to evoke a better crop, which is associated with the fertility cult. Other characters of the pageant are the Žalovice, or crying widows with their humorous verses.Didi are the most interesting part of pageant – they wear sheep fleeces up to 1,5 metres in height, and bells around their waists, dressing up in old clothes with colourful fringes. They symbolise the fight of good spirits with winter which they try to chase away with ringing and the noise. This old ritual is still a very relevant part of carnival pageants also in other parts of Europe. E.g. see our story about the villages in Northern Greece. 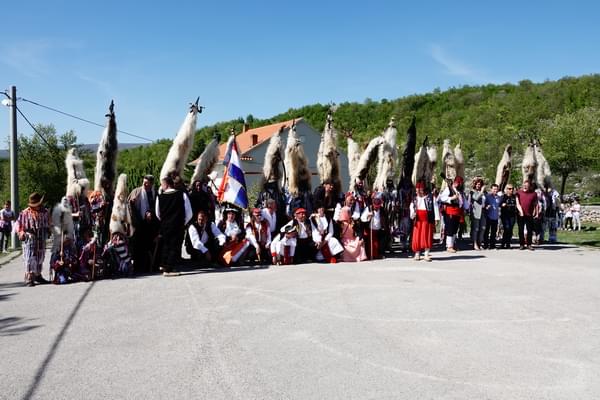