This is the start of a story about Dora Stratou. It will be extended in next updates of the site. We start with a discography and the first audio tracks which you can find here. The story is written and compiled in collaboration with Hugo Strötbaum Hugo's website.

Within the group of women who played an important role in the preservation of intangible cultural heritage (music and dance) in Greece (Dora Stratou, Domna Samiou and Melpo Merlier), Dora Stratou is the least known outside Greece. Given the quality of the music and dance she deserves more attention for the work she did during the nearly thirty years she led the group.

Biography of Dora Stratou and the start of the group

Taken from the site of the Dora Stratou Group. 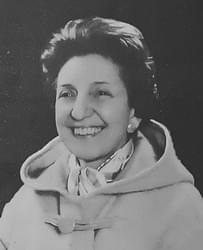 Dora Stratou was born in 1903 in Athens. Her mother, Maria Koromila, was the daughter of the playwright (“The Lover of the Shepherdess” and “Maroula’s Fate”) and journalist Dimitrios Koromilas, from an old Athenian family. Her father was Nikolaos Stratos, a lawyer from the village Loutro in the Etoloakarnania region. She grew up in the upper class urban environment of Athens at the beginning of the century.

She went Palace balls, studied foreign languages and singing, and befriended the offsprings of powerful families. Her piano teacher was Dimitri Mitropoulos, later famous conductor of the New York Philharmonic. She followed theatrical performances and concerts, a passion she maintained throughout her life.

Nikolaos Stratos, as member of Parliament, was Minister of the Interior in the cabinet of Dimitrios Rallis and subsequently joined the Liberal Party of Eleftherios Venizelos, becoming Minister of the Navy. In 1913, he crossed over to the royalist party and served as Prime Minister for a few days after the Asia Minor Disaster of 1922. For this he was sentenced for high treason and executed.

Her mother, together with Dora and her younger brother Andreas, left Greece. After a life of wealth, they found themselves suddenly on the threshold of poverty when their property was confiscated. Young Dora was traumatized by the execution of her father and the subsequent public humiliation. She spent the next ten years abroad – Berlin, Paris, New York – with her mother.

They returned to Greece in 1932. Her brother Andreas had studied law and was elected as a member of Parliament. Dora began to mix with the new crop of intellectuals of the inter-war period. She was twice married and divorced. During the Occupation (of World War II) she took an active part in the philanthropic works of the archbishopric. She assisted the later famous director Karolos Kuhn in the administration of his “Arts Theater”. In 1952 she saw by chance the 100-member national folk ensemble of Yugoslavia which was touring Europe featuring folk dances, music and costumes of its country. It was something of a revelation for the Athenian public. At that time in Greece there were very few performing groups, among them the pioneering one of the Lyceum of Greek Women, performing only two or three times a year, dressed in the urban Amalia costume. Their primary aim was to satisfy their own dancers, young Athenian girls of good families.

George Megas, university professor of folklore, suggested the establishment of a national ensemble in Greece. Dora Stratou then asked Sophocles Venizelos, vice-president of the government, to approve financial assistance. The idea was to establish permanent professional ensemble capable of daily performances and tours abroad. It would have a large repertoire, a rich wardrobe from many Greek regions, a program designed to attract audiences. And so, the “Greek Dances – Dora Stratou” society was created.

At the age of 50, she began this exhausting task with a passion. The first costumes were made by painter Yannis Tsarouhis, who also painted embroidery designs on them by hand. She toured villages to collect dances, songs, costumes, and folk jewelry, thus amassing the biggest collection in Greece. She selected the best dancers and instrumentalists to staff the ensemble. They gave successful performances in 21 countries. In 1963, Constantine Karamanlis, ordered the construction of a special theater for the ensemble on the hillside of Filopappou. In 1967, during the military regime, Dora Stratou was arrested for hiding the fugitive newspaper publisher Christos Lambrakis in her home. Melina Mercouri created an uproar abroad and succeeded in having Dora Stratou released. In the same year Dora Stratou was awarded the most prestigious international distinction, the World Theater Award, as well as the Academy of Athens Award and a Ford Foundation grant.

Besides all the work she did for the group, she also advised on projects in the field of Greek traditional music (e.g. the Unesco series of Odeon and Auvidis).

Taken from the site of Alkis Raftis. 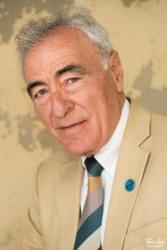 Alkis Raftis was born in Athens. His family lives there since 1860, his grandfather and great grandfather were bakers in Plaka, the old town under the Acropolis. Both his parents and other members of his family played leading roles in the Resistance during the Nazi occupation.

He speaks 6 languages and holds degrees from 4 universities (engineering, sociology, political sociology and management) in Athens and in Paris.

After being a senior executive in American multinational corporations, he served as professor at universities: Patras School of Engineeting, Patras School of Education, Paris-Dauphine and Paris-Sorbonne. He has given lectures in another 16 universities. He served as vice-governor of the ETBA national investment bank, and finally decided to concentrate on dance.

He has carried out ethnographic research on traditional dancing in villages, historical research on Greek dance since Antiquity, as well as research on dance in world art and poetry. Prof. Raftis is considered the leading authority on dance in Greece since the Antiquity, as well as on dancers around 1900 such as Isadora Duncan and La Belle Otero. His Dance History Gallery series is considered the most valuable tool for dance historians. He is currently working on the history of dance in the Eastern Mediterranean before 1900.

He has authored more than 20 books on dance, culture and management, and more than 100 articles. He has edited other 30 books, 11 CD-ROM volumes, 6 CDs, 2 DVDs and a bi-monthly review with over 110 issues.

The American recordings by Esoteric Records and licensed reissues

Jerry Newman was the owner and recording engineer of Esoteric Records. The recordings took place in the first months of 1954 during the America tour of the group. The quality of the recordings are very good. Newman used an Ampex tape recorder and two Telefunken U 47 microphones (these microphones are still produced these days). He published two records in 1954. Later on he changed the name of the company in Counterpoint Records. It is unclear if the contacts with Vogue/Counterpoint played a role in his decision. It is a fact that he was in Europe (France) for a longer time and he had contact with Vogue, that also ran the label Counterpoint. In 1963 Esoteric/Counterpoint was sold to Everest Records. These two essential records were reissued by other companies, in most cases after the company was acquired by Everest. Most reissues were officially licensed, but sometimes simply "stolen". More details can be found below. There were different names used: "Royal Greek Festival Company", "Dora Stratou Greek Dance Company", "Panegyris". The latter was not the name of the group, but the name of the program.

The notes on the back side of the record sleeves were written by the renowned Greek ethnomusicologist Fivos Anoyanakis. Sometimes these notes were used on reissues.

Other recordings of Dora Stratou from the sixties and seventies

During this period more companies issued records with new recordings.

A number of tracks are published on a number of records or cd's that are not dedicated to the group.

Records and CD's issued by the Dora Stratou Dance Company

Dora Stratou Dance Company issued from 1976 to 1983 36 LP records with catalogue numbers DS 101 till DS 136. This set of records coveres the whole of Greece.

In the nineties the company issued four CD's, and a double CD with a selection from these thirty-six LP's. There were also issued four CD's by other record companies, containing tracks from the series.